A recent survey of 4,831 active social network users, conducted by Kaspersky Lab in 12 countries, reveals that an overwhelming majority (78%) of respondents considered quitting their social networks — but chose to stay. They wanted to leave for a variety of reasons: 39% of users complained they were wasting too much time, the top response. The top reason not to quit was a desire to stay in touch with relatives and friends (62% of respondents).

In this post we present key survey results and their interpretations.

Our first question was: “Have you ever considered quitting social networks?” The overwhelming majority (78%) admitted that they had. A small fraction of them (6% of all respondents) went even farther and said that they actually hate social networks. About 17% had never considered leaving their social networks. These results were pretty consistent for all of the countries in which we ran the survey: United States, Canada, United Kingdom, France, Germany, Italy, Spain, Turkey, Russia, Brazil, Mexico, and Japan.

So: Why would users consider quitting their social networks? 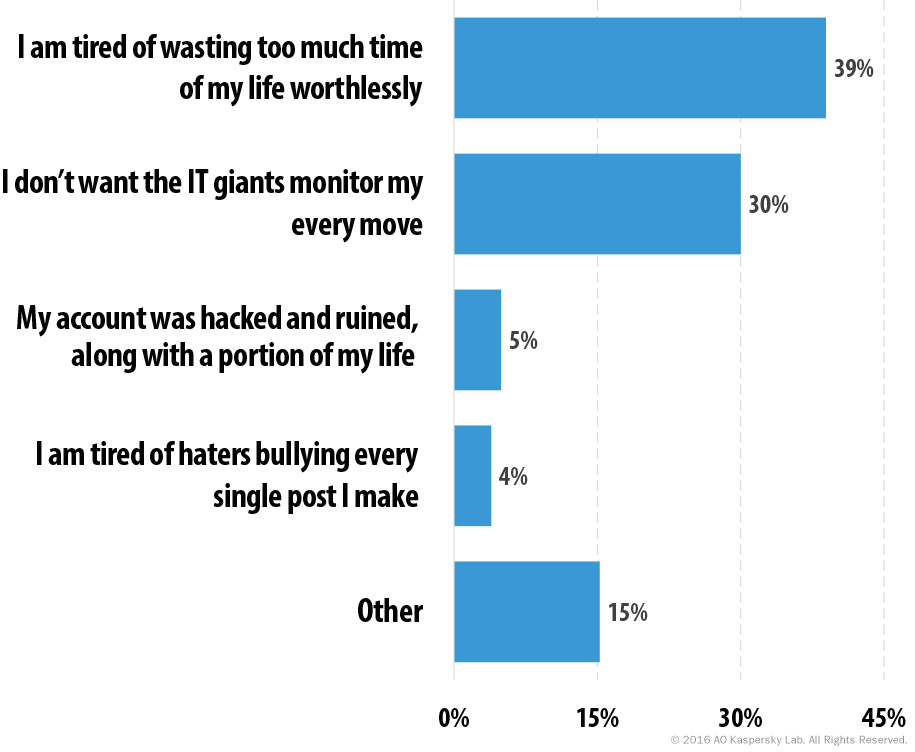 The top reason for quitting (39% of respondents) appears to be a growing feeling among users that they are wasting too much time on social networking sites. The second most popular reason overall (30% of respondents) was that they don’t want IT giants monitoring their every move online. However, the top two reasons were not uniform across the countries we surveyed. Countries including Italy and Germany flipped the top two, being more concerned about privacy than loafing, and users in Spain came close to rating IT giants’ monitoring their No. 1 reason to consider leaving social media. More detailed information on the number of respondents is reported below, in the “Methodology” section.

As we expected when we designed the survey, the most popular reason for staying was that they wanted to keep in touch with their friends and relatives (62% of respondents). 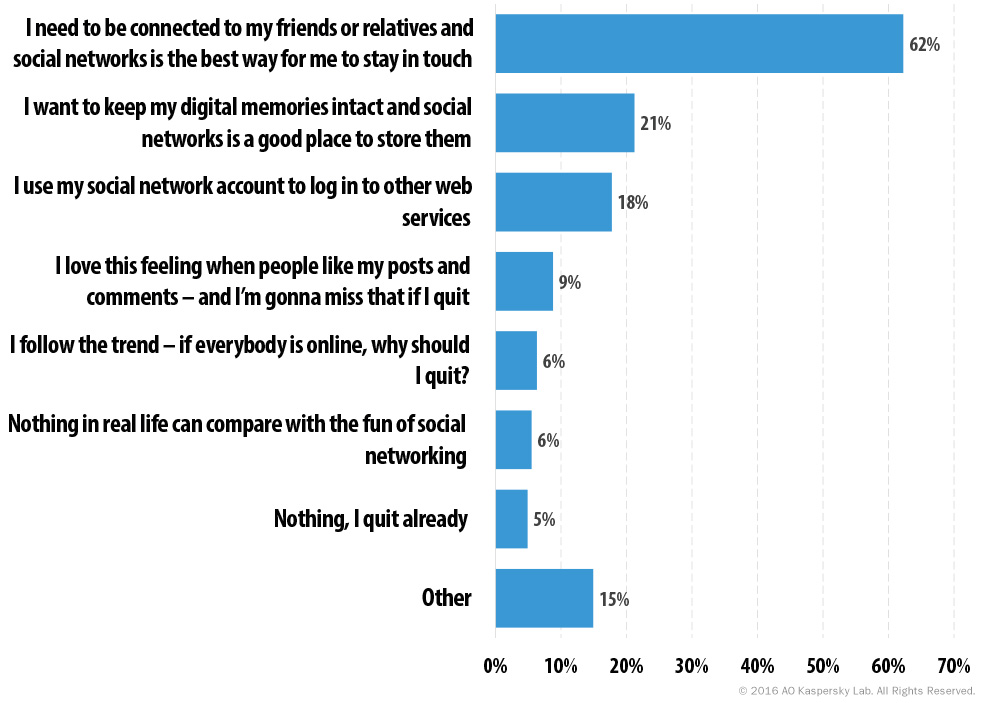 The second biggest reason named (21%) was that they want to share their digital memories online and feel that social networks are the best places to do that. One in six respondents (18%) said that they use social network accounts to log in to other Web services. 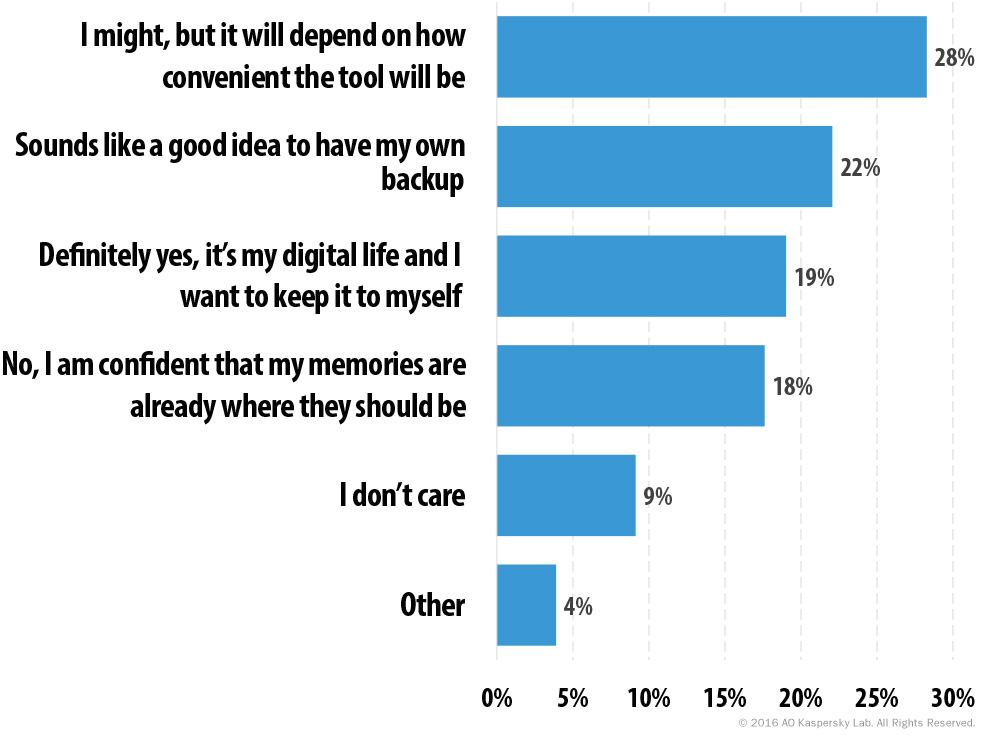 On the average, most users chose the option “I might, but it will depend on how convenient the tool will be” (28%). However, the second most favored option, “Sounds like a good idea to have my own backup” (22% on average) was slightly more favored in Brazil, Italy, and Spain. The option “It’s my digital life and I want to keep it for myself” was the third most important consideration (19%). 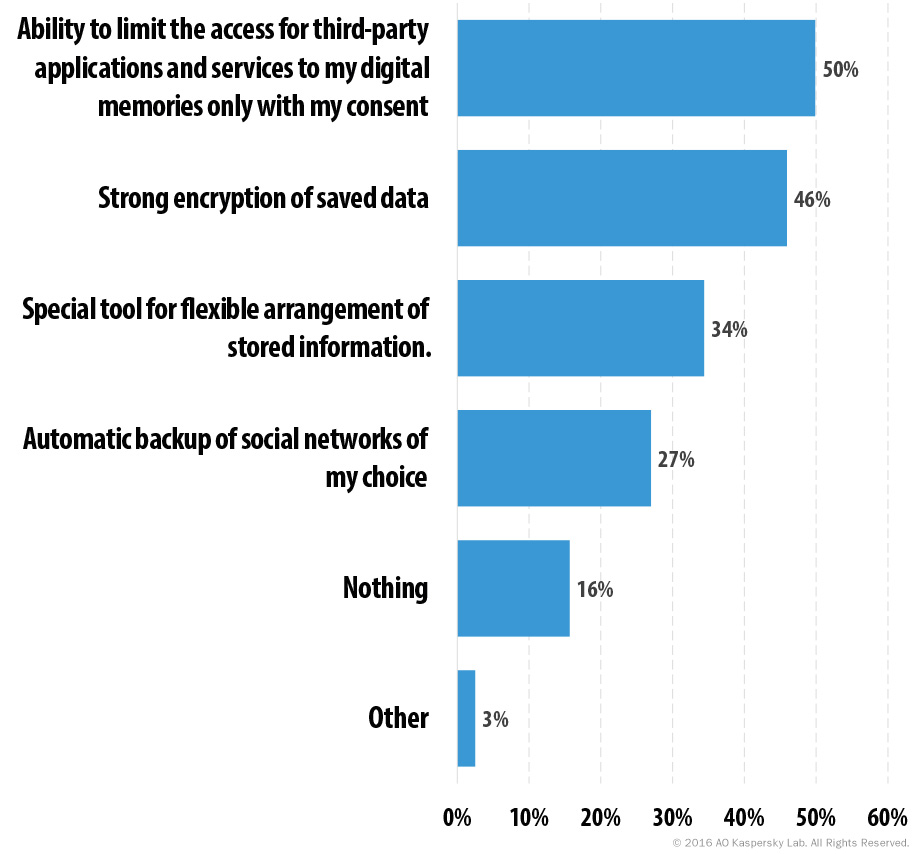 We then asked users about which features they would consider important in such a tool, and 50% of respondents named “Ability to limit the access to third-party applications and services to my digital memories” the most important. That wasn’t the case for all of the countries, though: respondents from Brazil voted more for the service to employ the best-in-class encryption for saved data — the second most preferred option (46% on average). In Russia, the most popular option was “Special tool for flexible arrangement of stored information” (No. 3 on average, chosen by 34% of respondents globally). Contrary to what we expected, only 27% of respondents selected the proposed automatic backup option.

The survey period was seven weeks starting in the beginning of October and ending in the middle of November. The survey, containing eight questions, was translated into nine languages: English, Spanish, Portuguese, French, Italian, German, Russian, Japanese, and Turkish, and programmed using Poll Daddy. We disseminated the link to the survey using paid Facebook and Twitter promotions in North America (US and Canada, EN(NA) on the graph below), the United Kingdom (UK), Spain (ES), Mexico (MX), Brazil(BR), France(FR), Italy(IT), Germany(DE), Russia (RU) and Japan (JP). We did not promote the Turkish (TR) version because we were interested in comparing the results with fully organic reach. 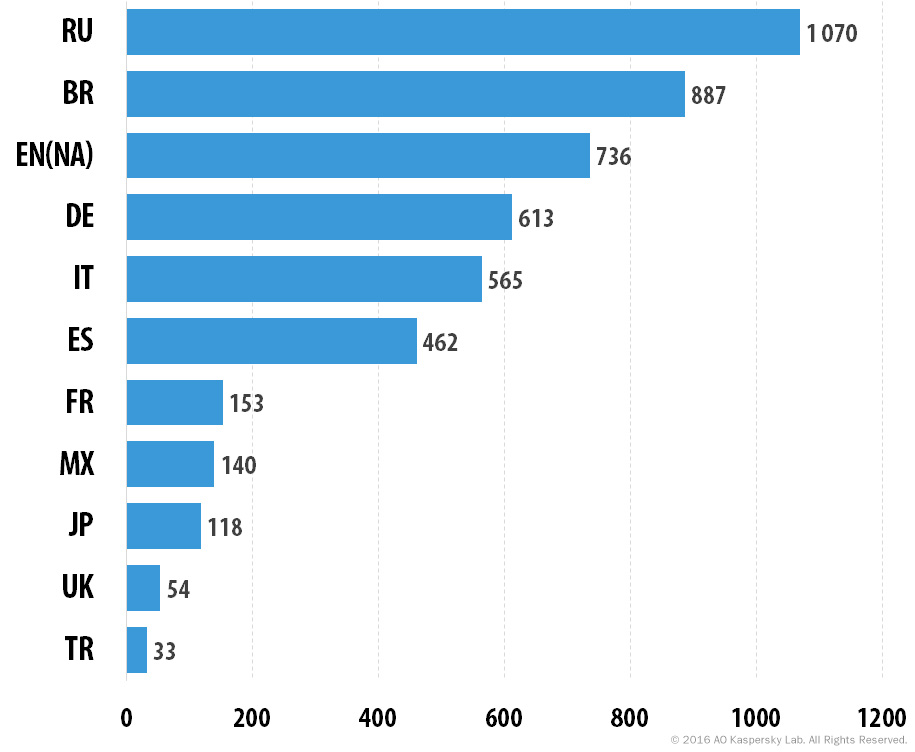 Questions “What prevents you from quitting [social networks]?” and “Which premium features [of the service] you might be interested?”, the responses to which are presented in figures 2 and 4, respectively, allowed for multiple choice.

In general, the age distribution of respondents in most of the countries follows the reference age distribution of Facebook users, which indicates an accurate representation of the population for Brazil and Russia, given the total amount of responses we received. However, countries such as Italy, Germany, the United States, and Canada had a much higher proportion of older respondents than Facebook does.

The gender distribution of respondents also was far from even, with 68% male and only 29% female (3% chose neither or preferred not to disclose) on average across all geographies. The only country with minimal gender disparity of respondents was Russia (51% male, 47% female, 2% undisclosed), and Brazil’s respondents were the most disparate (92% male, 7% female).

Online fraud is on the rise, but who is ultimately responsible and what can you do to protect yourself?