Listen, we’ve all been there; short on cash, recent move or staying at a friend’s home and without Wi-Fi. A quick scroll through the available networks near you show that there are 4-5 houses with Wi-Fi, better yet, they have no passwords. You could easily log on, do your business and no one would know and really no one would get hurt, right?

Although it would seem like this is a victimless crime, you really shouldn’t do this. For starters, it is still stealing, even if someone is foolish enough to leave their home network without password protection. Below are some additional reasons for you to pay for your own Wi-Fi instead of “borrowing” it.

Buyer beware when it comes to “free” Wi-Fi. Criminals are notorious for setting up fake Wi-Fi networks that are set up for free with the goal of stealing credentials of unsuspecting users just trying to surf the web. While that mostly happens in heavily populated places like coffee shops, malls or public parks near city centres, there is no telling that a Wi-Fi network named Susan’s House, is actually your neighbour Susan’s.

This network could just as easily belong to a neighbourhood prankster looking to get access to free credit cards, Netflix or your social networks.

Chances are that if you are able to get onto your neighbours network without a password, you have to also consider how much they really care about security. If you could get in there, anyone could.

Speaking of security, hopping on this network means that you are trusting your device to the “best practic-es” of your neighbor. If they have some sort of nasty infection lurking around their systems, there is the chance that it will hop into your system as well.

Better hope your Anti-Virus solution is up to snuff.

Do you like when a movie you are streaming gets stuck in buffering mode? Of course you don’t – this flat out stinks and can really kill the mood.

When you’re piggybacking on a neighbours Wi-Fi, not only will you have to deal with the speed that they paid for, but also the volume of people and devices that are actually on the network. Let’s say they are watching a movie on Netflix, their kid is playing League of Legends and their husband is downloading and updating all of the apps on his phone; it is highly likely that your download of Rihanna’s catalogue along with last season’s Game of Thrones from Pirate Bay will probably not be all that fast. 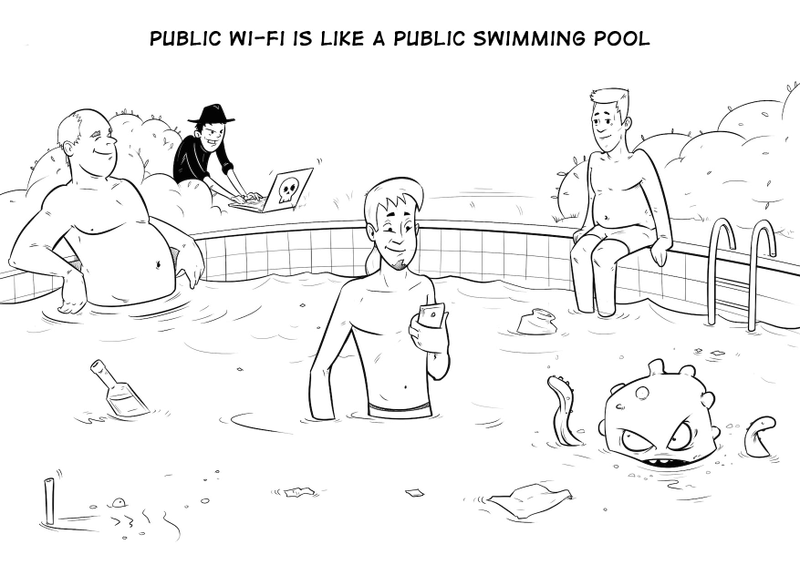 What do a public pool and public Wi-Fi have in common? Too many people!

But hey, you’ll probably complain because you’ve spent so much money in the process — oh wait. Plus if you think about it, your presence is also probably hurting the speed your neighbours paid for.

Everyone loves pizza and/or ice cream. Let’s be honest, free and tasty food is hard to pass up. The same often holds true when it comes to other “free” things, like your neighbours Wi-Fi. It is more likely than not that you have at least one neighbour who also found the honey-pot that is your other neighbours non-protected Wi-Fi.

Unfortunately, he may not be alone and may have shared this little nugget with his friends, the pizza guy, ice cream truck driver and those guys wearing Guy Fawkes masks who film bizarre videos and sleep all day. The same can be true for a Wi-Fi network that is not unprotected and actually has a password, but a relatively weak and easy to guess one. Like ‘Susan’ for the Susan’s Wi-Fi access point.

Problem is that you really can’t tell who is on the network at any given time. Given that the Wi-Fi is the weakest link in the security chain, you are really gambling and hoping that other people are not infecting everyone by opening weird links, installing malware or even stealing everyone else’s credentials.

Is it worth it?

In all honesty, your devices host all of your valuable data. Everything from work to family photos to your digital memories are stored on them. Do you really want to risk it all because you didn’t want to pay for your own Wi-Fi?

If you ask me, the answer is NO. Not only is “borrowing” Wi-Fi from your neighbours illegal, but it is also pretty reckless.

Buck up, buy a plan and then make sure that you not only protect the network with a strong password, but that you are also installing anti-virus software on your devices so that you have extra protection when you surf the Internet. An option that I can recommend is Kaspersky Total Security, as it has many features that will help secure your machines. Be sure to share this post with your friends who may have the desire to get something for free or tell us any Wi-Fi stealing horror stories that you may have encountered.