What is fake news?

Misinformation isn’t a new phenomenon – the term “fake news” was actually used in the 19th century – but the internet and soI don’cial media have transformed how it’s created and spread. Pre-internet, people tended to receive their news from trusted media sources whose journalists were required to follow strict codes of practice. The internet enabled new ways to publish, share and consume news and information, with relatively little regulation or editorial standards. Many people now consume news from social media and other online sources – but it’s not always easy to determine which stories are credible and which are false.

There are different types of fake news, depending on the motivation of those who create it. For example:

Sensationalism sells, and outrageous or weird stories and distorted images drive clicks and shares online. Clickbait refers to stories deliberately designed to get more website visitors and increase advertising revenue for the website owners – often at the expense of truth and accuracy.

This refers to false or distorted stories written to mislead audiences and promote a political agenda or biased perspective.

Sometimes, journalists don’t have time to check all their facts before publishing, leading to genuine mistakes becoming fake news. However, trusted new sources will correct errors in their stories and be transparent with readers when they’ve got things wrong.

Sometimes a story may be broadly true, but a sensationalist or misleading headline is used to entice readers to click on it. This can lead to fake news – since usually only the headline and small snippets of the article are displayed on social media, where it can quickly spread.

This is when genuine news sources are impersonated with false, made-up stories to deceive or mislead audiences.

Some fake news is published for entertainment value. For example, satirical stories use humor, irony, or exaggeration to joke about the news or famous people. These stories don't attempt to mislead audiences because they aren't meant to be taken seriously. Notable examples of satirical websites include The Onion and The Daily Mash.

High-profile politicians have been known to dismiss stories they disagree with – which may be factual and verified – as “fake news”. Because the term “fake news” is expansive and means different things to different people, it can be contested. In 2018, the British Government banned the term from official papers or documents, claiming it was too poorly defined to be meaningful. Instead, it prefers to use the terms "misinformation" and "disinformation" when describing false stories:

How does fake news work?

Fake news is often spread through fake news websites, which, in an attempt to gain credibility, often emulate authentic news sources. According to research, social media enables false claims to spread quickly – more quickly, in fact, than real news. Fake news spreads rapidly because it’s typically designed to grab attention and appeal to emotions – which is why it often features outlandish claims or stories which provoke anger or fear.

Social media feeds often prioritize content based on engagement metrics – that is, how often it’s shared and liked – rather than how accurate or well-researched it is. This approach can allow clickbait, hyperbole, and misinformation to spread widely. Social media companies are seen as platforms rather than publishers, which means they don’t have the same legal liabilities as traditional media outlets – although this may change as the political and legal landscape evolves.

Social media bots can spread fake news since they mass produce and spread articles, regardless of the credibility of their sources. Bots can create fake accounts online, which then gain followers, recognition, and authority – some of which are programmed to spread misinformation.

Trolls – internet users who deliberately try to start arguments or upset people – also play a part in spreading fake news. Sometimes they can be paid to do so for political reasons. The terms “troll farm” or “troll factory” are sometimes used in this context to refer to institutionalized groups of trolls who attempt to interfere in political decision-making.

Fake news sometimes involves the use of Deepfakes. These are fake videos created using digital software, machine learning, and face-swapping. Images are combined to create new footage which shows events or actions that never actually took place. The results can be very convincing and difficult to identify as false. 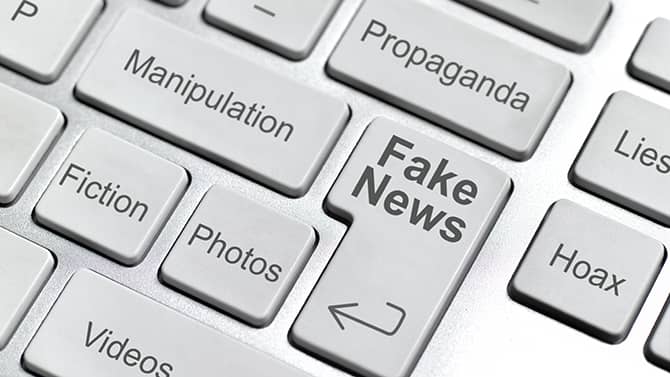 The Covid-19 pandemic provided fertile ground for false information online, with numerous examples of fake news throughout the crisis. A persistent example of fake news in social media was the claim that 5G technology was linked to the spread of the virus – supposedly because 5G suppressed the immune system while the virus communicated through radio waves. These claims were not true and were repeatedly debunked by official sources but were still shared extensively.

US presidential election in 2016

Fake news and misinformation became a big issue during the US election in 2016, with false and misleading claims across the political spectrum. One analysis suggested that a large proportion of fake news generated in the election was created by teenagers in Macedonia, who found the more hyper-partisan stories they created, the more people clicked through and shared, and the more money they made as a result.

In the wake of the Boston Marathon bombing in 2013, false claims that the bombing was an elaborate ruse plotted by the US government circulated online. In the wake of many terrorist events across the world, conspiracy theories are often rife. The notion that they are "false flag" operations – i.e., carried out by the state or a secret cabal to pin the blame on others or provide cover for other activities – is a common trope.

In 2012, satirical website The Onion ran an article claiming that North Korean dictator Kim Jong-un had been voted the sexiest man alive, declaring that "the Pyongyang-bred heartthrob is every woman's dream come true." In an example of how satire can sometimes be misunderstood across cultures, publications in China – including the online version of China's Communist Party newspaper – reported the claim as though it were true.

What are the dangers of fake news?

People often make important decisions – for example, how to vote in an election or what medical treatment to follow when they’re ill – based on what they read in the news. That’s why trusted news is so important. The dangers of fake news include:

How to identify fake news

Check the web address for the page you're looking at. Sometimes, fake news sites may have spelling errors in the URL or use less conventional domain extensions such as ".infonet" or ".offer". If you are unfamiliar with the site, look in the About Us section.

Research them to see if they are credible – for example, are they real, do they have a good reputation, are they writing about their specific area of expertise, and do they have a particular agenda? Consider what the writer’s motivation might be.

Are other reputable news or media outlets reporting on the story? Are credible sources cited within the story? Professional global news agencies have editorial guidelines and extensive resources for fact-checking, so if they are also reporting the story, that’s a good sign.

A lot of fake news is cleverly written to provoke strong emotional reactions such as fear or anger. Maintain a critical mindset by asking yourself – why has this story been written? Is it promoting a particular cause or agenda? Is it trying to make me click through to another website?

Credible news stories will include plenty of facts – data, statistics, quotes from experts, and so on. If these are missing, question why. Reports with false information often contain incorrect dates or altered timelines, so it’s a good idea to check when the article was published. Is it a current or old news story?

Even if the article or video is legitimate, the comments below may not be. Often links or comments posted in response to content can be autogenerated by bots or people hired to put our misleading or confusing information.

7. Check your own biases:

We all have biases – could these be influencing the way you respond to the article? Social media can create echo chambers by suggesting stories that match your existing browsing habits, interests, and opinions. The more we read from diverse sources and perspectives, the more likely it is that we can draw accurate conclusions.

Satirical websites are popular, and sometimes it is not always clear whether a story is just a joke or parody. Check the website to see if it’s known for satire or creating funny stories.

Images you see on social media could have been edited or manipulated. Possible signs include warping – where straight lines in the background now appear wavy – as well as strange shadows, jagged edges, or skin tone that looks too perfect. Bear in mind, too, that an image may be accurate but simply used in a misleading context. You can use tools such as Google’s Reverse Image Search to check where an image originates from and whether it has been altered.

Some of the best known include:

Fake news relies on believers reposting, retweeting, or otherwise sharing false information. If you're not sure whether an article is authentic or not, pause and think before you share. To help stay safe online, use an antivirus solution like Kaspersky Total Security, which protects you from hackers, viruses, malware, and other online threats.

How to identify fake news

Kaspersky
Fake news is information that is false or misleading. Learn about fake news examples, the dangers of fake news & how to identify misinformation.

How to choose the best online games for kids

How To Protect Your Child from Identity Theft

How to lower ping and optimize online gaming performance

Do You Need a Tracking Device for Your Kid?